In the Before Times, immediately after a holiday or spell overseas, I’d often find myself walking through the inner suburbs of Sydney thinking: “Where the hell is everybody?”

On sunny days in other places public spaces teem with life in ways Australian cities simply do not. In New York, after a long winter indoors, people burst out of their homes to lounge on stoops; in Hanoi residents fill footpaths to share steaming meals; while in Berlin, where more than a third of the city is green space or water, people cycle to parks to sink beers and sunbathe topless whenever the weather allows. Such fun! Especially to an Australian visitor, accustomed to being castigated for pulling up an extra chair at an outside table. 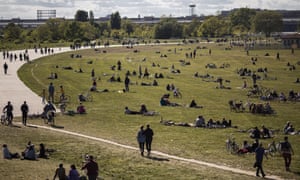 That feeling of togetherness among strangers in public, the crowdedness and buzz that other cities are good at, is a huge part of what made them so attractive to visit, back when we could.

Australia by comparison, save for the beach or certain public parks, can feel surprisingly cloistered. People often seem hidden in cars, behind suburban fences, in air conditioned malls and cafes that turn their back to the street, rather than opening out to it. Revelry is often curtailed by alcohol-free zones and strict footpath dining and drinking rules. The growth of cycling is sometimes stubbornly resisted. For a country mostly blessed with warm weather and clean air, it’s striking how many aspects of public life take advantage of neither.

‘A summer like never before’: Victoria and NSW prepare for Covid risk in the holiday season

Though there has been a growing push for greener cities with more outdoor living in Australia for many years, the pandemic is kicking this movement up a gear.

There is still a lot we don’t know about Covid-19, but most experts agree airborne transmission is a far greater risk in poorly ventilated, indoor spaces where people are forced into close proximity. With this in mind, Australian cities, like cities around the world, are realising outdoor space is one of the most precious commodities they have.

The Victorian premier Dan Andrews has touted alfresco dining and closing streets to help Melbourne open up from its interminable lockdown. Even the New South Wales government, which enforced a stifling pub lockout for much of the last decade, is citing the benefits of “joie de vivre” that can come with drinking outdoors as it moves to further relax drinking rules. In Sydney, six pop-up cycleways have been installed, fees are being waved to encourage footpath dining and, this week, the city council announced the pedestrianisation of another section of George Street to allow social distancing. 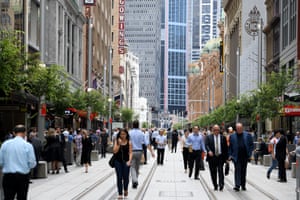 The country’s wounded economy is named as the beneficiary of these changes, but I’d argue our fraying psyches need it just as badly. We have all spent so much time indoors this year, away from each other. The collective claustrophobia is real – there are days I’ve almost wanted to Gilbert Grape my own house.

Until there is elimination, or a vaccine, many will feel tentative about venturing out to eat, drink or socialise – unless perhaps, they can stay outdoors, at a safe distance, soaking up sun or starlight while they do it. I don’t give a damn if meals do become “cold and corrupted” sitting outside, as one critic warned. Better that than sweating and spoiled from a delivery box. I would take a buzzy street full of tables amid a virus-dispersing wind over a night in – or another spike in infections – any day.

We should be focused though not just on how businesses can expand outside, but on how we can reclaim public spaces for everyone. Removing alcohol-free zones – so often enforced with racist policing – is one way to ensure alfresco eating and drinking is not just the preserve of those who can afford bars and restaurants. Allowing libraries and community centres to use outdoor space would help ensure their vital role in our cities are not diminished. 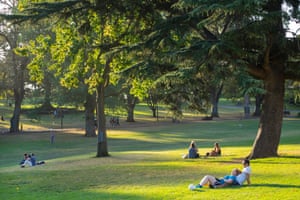 Reclaiming streets from cars not only boosts cheap and sustainable forms of active transport, but creates new space for gatherings, performance and even protest. Though it is notable the encouragement of outdoor activities has not always extended to political protest in NSW at least, with students arrested at Sydney University last week despite gathering in numbers smaller than can be found indoors at most pubs – or on the lawns of the university for lunch.

The pandemic has already strengthened the arm of councils installing bike paths and closing city streets to traffic. It should also embolden communities in their fight for green space amid dense urban redevelopment. Sydney’s lord mayor Clover Moore has called for reclaiming more land in densely populated areas for public recreation – such as the greyhound track in Glebe or part of the vast Moore Park golf course. It certainly worked in Elsternwick.

2020 made me open up to strangers, but apocalyptic small talk is wearing thin | Josephine Tovey

One other silver lining of the pandemic has been the demonstration that governments can take radical action in the public interest when they want to. This approach could be extended to so many aspects of urban life. It’s a good time for bold ideas – like having a tinnie under a tree.

All this will not only help us endure this pandemic but will help create a greener, livelier city. Most importantly, it will help rebuild the sense of community and public togetherness so missing from this dreary omnishambles of a year. 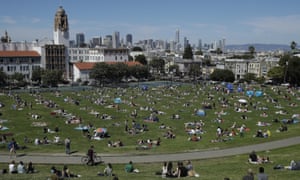 In her book A Paradise Built in Hell, Rebecca Solnit chronicled how the people of San Francisco came together in parks and public places after an earthquake razed their city in 1906, finding solace and support with one another. She quotes resident Pauline Jacobson, who observed the “sweetness” of the disaster was not the bravery it prompted, nor the new city it would produce, but rather the “new inclusiveness … the joy in the other fellow”.

Even outdoors, our ability to gather together this summer has limits. Governments have warned social distancing is still important outside, including at the beach or in parks, and mass outdoor events like the New Year’s Eve fireworks are in doubt. We have to slip, slop, slap and mask at times. But after a period of our cities looking emptier than ever, there could be real joy to be found with each other, outside.