Enveloped in an old-growth forest deep in British Columbia’s interior, we’re surrounded by lush plants – boreal moonwort and rough-fruited fairybells – and though we’re a thousand kilometres from the Pacific, it feels as though the coast is right beside us.

This year, the experience of setting up a tent and hiking the Berg Lake Trail, a 25km route through a provincial park on the British Columbia (BC)-Alberta border, and part of Mount Robson, highest peak in the Canadian Rockies, is only happening in my mind. BC’s provincial campsites are currently closed to non-residents, and though I live just an hour from the trailhead, I’m on the wrong side of a border in Alberta. Still, memories live on, and I’m OK with lying here on the sofa on a rainy Saturday, remembering a past summer weekend with friends. 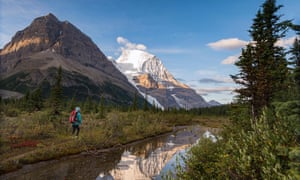 Carrying 20lbs of weight on our backs, we look as though we’re trudging, but inside I feel we’re dancing. Rain is coming in over western Canada’s woods and valleys, its rivers and towns and dams, and everything is wet — the mosses and cedars and us.

We set off late after work from the town of Jasper, in the Alberta national park of the same name, and the sky is darkening as we set up at Kinney Lake campground, just over the BC border. Crawling into my damp tent, I think of the stars and lunar tides swooping above me as I fall asleep. I think that if I had a garden, I’d camp outside all summer. I’d camp until the grass beneath me turned the colour of limes, then lemons.

The next morning, everything spangles with light – the grasses and swaying trees; the single cloud that floats above the lake like a tiny whale. As I stretch and lift my tent pegs from the earth, as I place tent sheets over rose bushes to dry in the sun, I wonder why this feels so good, yet hanging laundry to dry in my flat feels like such a chore. I think it must have something to do with time, how it seems to move more slowly out here. I think it must also have something to do with this chipmunk running over my boots. 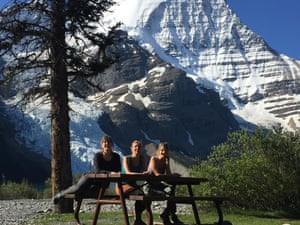 I find my friends are already up. We light the paraffin stove with matches. We boil water from a mountain stream. I place spoonfuls of instant coffee in the pot and we curl towards the steam like foxes curl into sleep. Our tents and sleeping bags, our toothbrushes and tin mugs are stuffed into backpacks. Sunscreen is slathered over shoulders and cheeks. We dance on, and I find it feels good to have everything I need on my back.

Mount Robson was not always named after a white man. The Texqakallt Nation knew it as Yuh-hai-has-kun, The Mountain of the Spiral Road. Settlers have long been heady for this place. Dreaming of bagging the 3,954-metre peak, in 1909 an Edmonton clergyman took a pack horse to the mountains and tried to scale these heights. He ate marmots and birds for sustenance along the way, and though he reported reaching the top, he only made it to a false summit, missing the icy, domed top by around 18 vertical metres. We’re only walking a path that twists for 13 miles and 800 metres of ascent through yesterday’s forest and today’s sun-soaked Valley of a Thousand Falls, to a glacial lake where we’ll spend the night.

Something about walking here stills us into silence. As 1,500-metre waterfalls wheel down red rock like lightning bolts, we speak with our bodies. Arms stretch out. Fingers motion at eagles, at orchids, at Idas blue butterflies like shattered flints of sky. 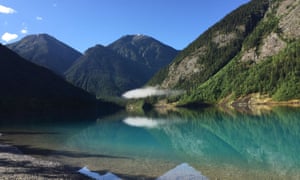 I feel that time is now moving at the rate of contemplative thought, which, writer Rebecca Solnit suspects, moves at the speed of walking – around three miles an hour. “If this is so,” she writes, “then modern life is moving faster than the speed of thought, or thoughtfulness.”

The shape of time feels different, too. For most of us, it appears linear, running from left to right like English words on a page or screen. Left is the past, right is the future. On bad days, for me, time is no long line; instead it’s a fractured thing, like morse code, or a series of open internet tabs. My mind often matches that state. Now, though, time matches the terrain. It’s a loose spiral, with the past I’ve walked up today the same as the future I’ll walk down tomorrow. 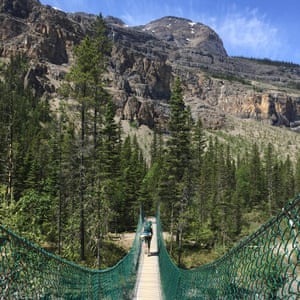 The Yupno people of Papua New Guinea always experience time geographically. For them it appears as a hill, with the future running up and the past leading down towards the mouth of the local river. Topographic time systems may once have existed elsewhere too, according to cognitive scientist Rafael Núñez of the University of California, San Diego. Before we travelled so much, the perception of time may have been based on local features, such as valleys and water courses.

Now, blue braids of water are turning into a lake the colour of bluebirds. Glaciers are rippling down the mountainside like gelato. Tiny bergs shimmer in the water. We’ve reached the subalpine plateau where we’ll sleep tonight, and the only thing to do is break out the whisky and sweets. Stretching out on warm stones by the water, we pass round bottles and bags until June heat takes over and our eyes close. Purple flowers of sunlight flicker on my eyelids, and as I chew on a piece of raspberry liquorice I have a memory of being a kid and thinking how good adulthood would be. I’d be able to play with my friends all day and never be called home for dinner. I’d be able to eat all the sweets I could ever want.

Friendship and sweets, I’ll take those. The memory of the Berg Lake Trail – its orchids and daytime moons – even though for now I can’t be there, I’ll take that, too. As Blaise Pascal put it, in difficult times, it’s good to “carry something beautiful in your heart”.