The moon is a loyal companion. Its mystery continues to captivate the entire world, which is probably why hearing the phrase, "Once in a blue moon," didn’t phase you at first, especially after hearing so many people around you say it on occasion. But is a blue moon really blue? Sadly, no — but that doesn’t make it less unique, let alone enchanting.

Ironically, the upcoming full moon — happening on Oct. 31 at 10:49 a.m. ET — will be a blue moon, which seems like the perfect fit for Halloween. Although, before giving you the 411 on the paradox of this cosmic event, let’s set the record straight. The term "blue moon" is used to describe a second full moon occurring during one calendrical month in the year. It directly speaks to what happens when there are four full moons in one season; the third full moon is the blue moon. This doesn’t happen often, which is precisely where the context of the phrase, “Once in a blue moon,” stems from.

Though the moon may seem to change colors from time to time, everything is a matter of perspective. The viewing angle, and the composition of the earth’s atmosphere, can make the moon appear differently. It’s no wonder this luminary continues to create such intrigue. 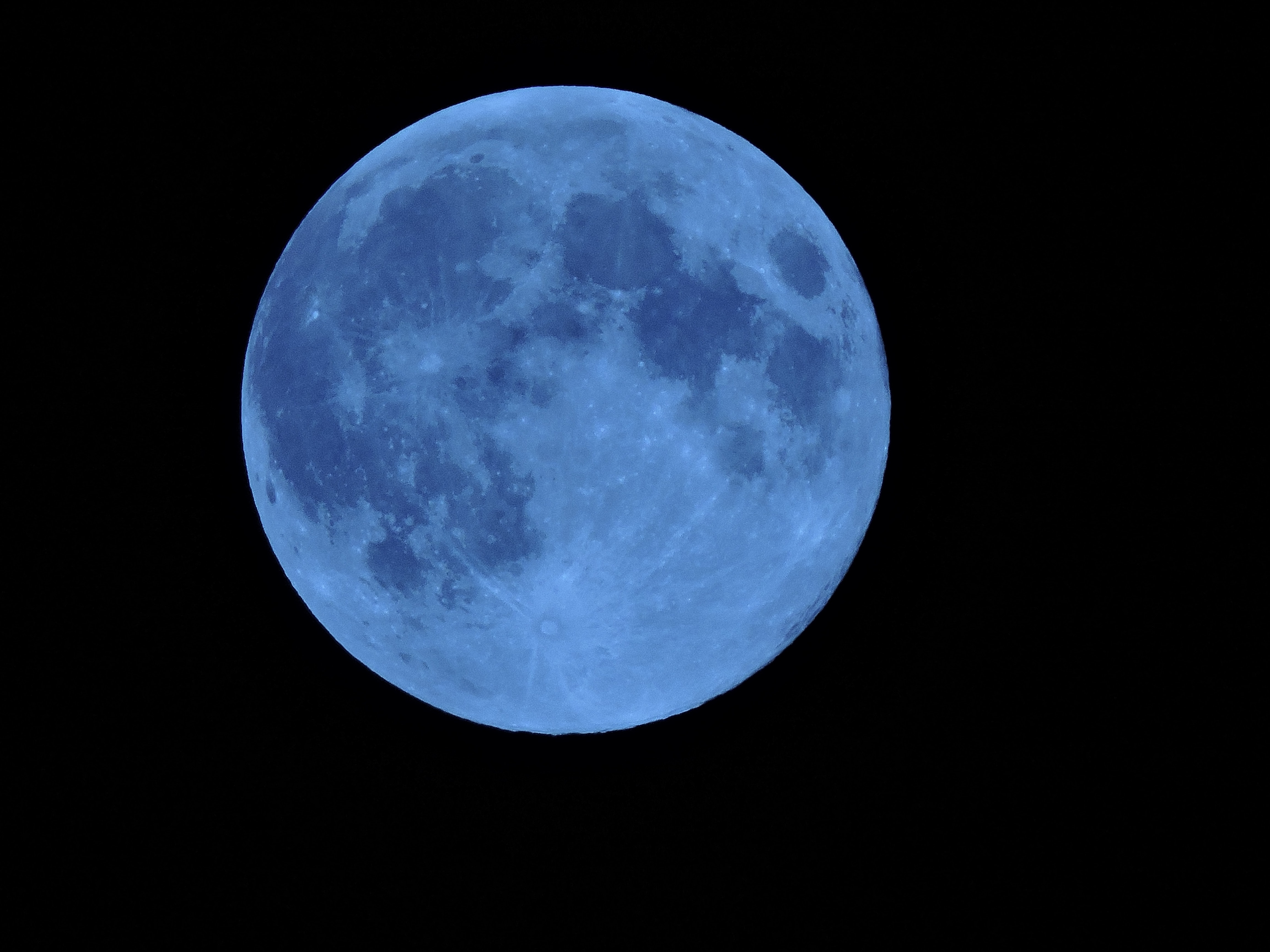 If you have "Blue Moon" by Billie Holiday all set and ready for this celestial event, you wouldn’t be totally wrong. Then again, you could always listen to the 1943 song, written by Richard Rodgers and Lorenz Hart, from the movie Grease instead — depends on your mood.

According to Farmer’s Almanac, there will be a total of 13 full moons, including two supermoons, and a full moon on Halloween, this year. There are many reasons why this lunation is so incredibly rare, but in addition to being a blue moon, the full moon on Halloween is also referred to as the Hunter’s moon. This is when the ancients would begin to prepare for the winter season, which consisted of hunting, slaughtering, and preserving meat for the upcoming months.

It’s no secret that having a full moon on Halloween isn’t very common. It actually occurs every 19 years or so, which directly speaks to an astronomical pattern referred to as the Metonic Cycle. Greek astronomer Meton studied the moon’s orbital period, discovering a number of pivotal patterns. For instance, every 19 years, a particular moon phase repeats on the same date. This means there will be a blue moon on Halloween 19 years from now, too.

The Irony Of There Being A Full Moon On Halloween

As if everything about this full moon wasn’t ironic enough, Halloween takes place during Scorpio season, which also happens to be the most mystifying among the rest of the zodiac. During the full moon phase, the sun directly opposes the moon, which means the full moon will be lighting up the sign of Taurus. Although, what’s even more bizarre about this lunation is, it will conjunct Uranus, the planet of chaos, rebellion, and unexpected change. It really doesn’t get weirder than this, which is one of many qualities that make Uranian energy so unique. It’s spontaneous, electric, and quick to catch you off guard.

So if you’re not in the mood for goblins and ghouls, don’t go trick-or-treating this year, because things are about to get very strange around here. Remember, Scorpio is Taurus’ polar opposite, which means the upcoming lunation will be a reflection of its mystery — taboos and all. Governed by Pluto — Lord of the Underworld — Scorpio is both the darkest dark and the lightest light. And the veil between both worlds is about to be dissolved.

This article was originally published on Jan. 30, 2018