Amid the COVID-19 pandemic and allegations of increased animal abuse resulting from the accompanying economic downturn, Thailand’s Ministry of Foreign Affairs today released an announcement of the country’s firm, zero-tolerance stance against animal abuse, cruelty or neglect.

In March 2020, after the Thai government was forced to enact partial lockdown measures, and the tourism and services sectors saw business dry up, the financial situation for many animal-related attractions became dire.

News emerged that captive elephants around the country were being held in inhumane conditions, with most facilities’ staff having been laid off, and the few that remained struggling to feed and care for the animals.

Soon afterward, animal-welfare controversies were fueled by video footage and reports that alleged the abuse of monkeys involved in Thailand’s coconut industry.

Thailand’s economic crisis was only compounded by the negative attention that accompanied these reports and subsequent campaigns to ban Thai products.

Instead of improving the animals’ situations, local communities that are struggling to survive amid the pandemic are suffering due to these boycotts.

The Thai government addressed the concerns in its statement, reporting that the Department of Livestock Development (DLD), through its network of provincial offices scattered throughout the country, was able to solve the food shortages for elephants that arose due to lack of tourism income.

“It was able to distribute over eight tons of fresh grass and over 25 tons of hay to elephant camps all over the country, resolving the problem within weeks,” wrote the Ministry of Foreign Affairs. The government also said that it recruited animal welfare organizations to the cause and, with their help, temporarily relocated the elephants to locations that have adequate food supplies.

Thailand initially took a stand to protect animals in 2014 by introducing the Cruelty Prevention and Welfare of Animals Act and the DLD shortly thereafter. Within the DLD, the Division on Animal Welfare and Veterinary Service was also created, and official guidelines and regulations to enhance welfare standards for specific animal species were established, with a sub-regulation on elephant welfare management that reinforces the Five Freedoms and caters to the specific needs of elephants. 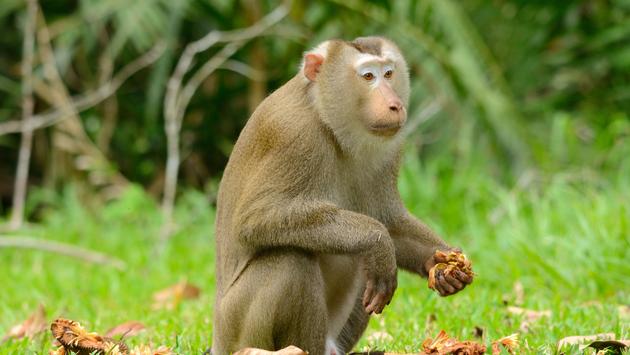 To raise awareness surrounding animal welfare and encourage public participation in stopping animal abuse, the DLD has established complaint channels so that any perceived mistreatment of animals can be reported directly to authorities or through the ‘DLD 4.0’ mobile app.

Addressing the monkey abuse allegations, the government referred to its Wildlife Conservation and Protection Act of 2019, in which macaque monkeys are identified as a protected species, with official registration required for ownership. And, while it’s true that, in some areas, monkeys are used to help collect coconuts in small-scale harvesting in communities that depend upon coconuts for their livelihoods,

In fact, NPR reported that these pig-tailed macaques have been raised and trained to pick coconuts for around 400 years in Thailand.

Far from being ill-used, the Ministry of Foreign Affairs said, these monkeys are widely known to be treated as members of the family—happy, healthy, well-fed and cared for within the household during their non-working hours. They are not trained through force or intimidation, but through repetition and reward, resulting in a cooperative effort that benefits both man and monkey.

The Thai Food Processors’ Association (TFPA) affirmed that monkeys are not used at an industrial scale and export firms, which sell to suppliers and retailers, report that no monkey are involved in their supply chains. There’s also an auditing system, including random inspection of coconut plantations, in place the ensure the rules are adhered to.